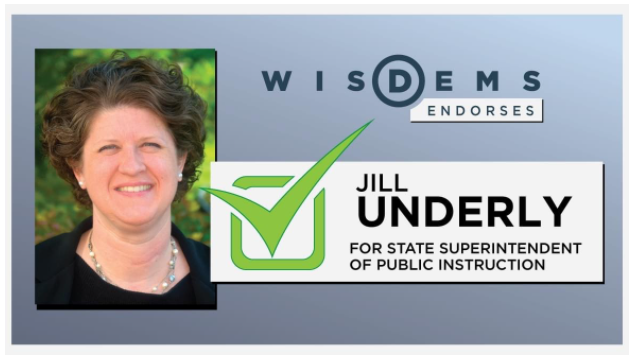 The Spring Primary made one thing clear: there is one true progressive public schools champion in the race for State Superintendent, and that’s Dr. Jill Underly. The Democratic Party of Wisconsin is proud to endorse her campaign to become our next Superintendent at the Department of Public Instruction, a job once held by our own Governor Tony Evers.

Dr. Underly has more than two decades of public education experience, and has served kids pre-kindergarten through college, as a teacher, a principal, a mentor, and a district superintendent.

Sign up to get involved in Jill Underly’s campaign at: https://underlyforwi.com/join-the-team/.

A LOT has happened this week, and you might not have been able to keep up with it all (that’s okay). Here’s a quick round-up:

1. Trump was impeached! Again. Every Democrat in the Wisconsin Congressional delegation voted for impeachment. Thank you Congress members Kind, Moore, and Pocan for doing your duty and standing up for American democracy!

Every Republican House member from Wisconsin voted against impeaching Trump for inciting violent insurrection at the Capitol. This includes:

2. Governor Evers gave his State of the State address, and laid out a powerful agenda for the people of Wisconsin. You can watch the full speech here, and here are some highlights:

3. The WisDems launched a six-figure ad buy calling on Ron Johnson to resign for his role in inciting the violent insurrection in DC last week.

Click here to watch our Ron Johnson ad (and donate, if you can, to help us reach more people)!

Washington, D.C. — Since his campaign for chair of the Democratic National Committee, DNC Chair Tom Perez has promised to conduct a presidential primary process that is transparent, fair, inclusive, and puts the party in the best possible position to take back the White House in 2020.

Perez has followed through on this promise by passing historic reforms that have expanded the use of primaries, made caucuses more accessible, reduced the influence of superdelegates, and increased transparency of the DNC’s budget and operations. He is continuing this effort with his approach to the presidential primary debates.

Perez and his team have held more than 80 meetings over the course of many months with a variety of individuals who have knowledge of and experience with the debate process.

“To win back the presidency in 2020, Democrats must lead with our values. That began with the historic reforms to expand and increase trust in our party, and it will continue by conducting party business fairly, transparently, and inclusively throughout the 2020 primary process,” said Chair Perez. “To that end, we have listened and learned about debate experiences from a wide array of stakeholders.

“My goal in this framework is to give the grassroots a bigger voice than ever before; to showcase our candidates on an array of media platforms; to present opportunity for vigorous discussion about issues, ideas and solutions; and to reach as many potential voters as possible. That is how we will put our nominee in the strongest position possible to defeat Donald Trump, and how we will help elect Democrats up and down the ballot.”

FOR THE FIRST TWO DEBATES:

The specific criteria for the first two debates will be announced in January 2019.

The following is the statement of Democratic Party of Wisconsin Chair Martha Laning with regards to former FBI Director James Comey’s testimony before the Senate Intelligence Committee today:

Like many of you, I was shocked when the news broke last week that President Trump had fired his FBI Director, James Comey. Immediately I thought that it was an affront to Democracy for the President to fire the very person leading an investigation into Russian interference in the 2016 election. As DNC Chair Tom Perez said after the news broke, we need to wake up and smell the cover up.